Sunday, May 12, we left Sandwich Marina at 9 a.m. At the time we were headed for Cape May. We started the day with a great oatmeal breakfast.

The ride through the 8 mile canal was stunning. All along the canal are walkways on both sides for walkers, bicycles and skaters. Very cool. There were also fishermen seen fishing the banks along the way.

The captain gets a little loving from Arlene before she goes down for a nap. 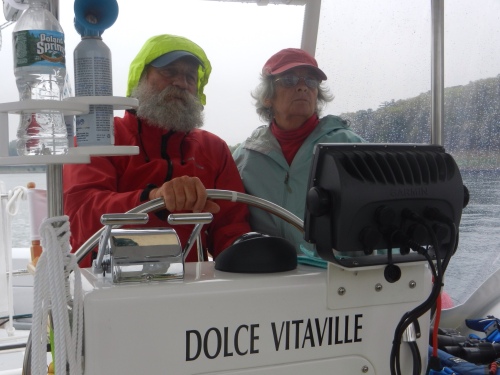 We passed under the Sagamore Bridge,

and the Railroad Lift Bridge.

It was a three hour ride for us since we were going against the tide and were only making 2 knots. We passed a barge that was going about 10 knots since he was going with the tide.

We saw a great RV park and many beautiful homes along the canal. 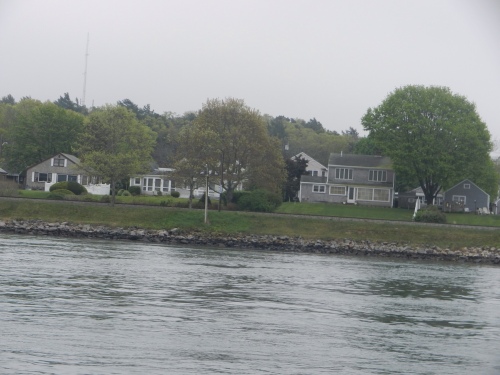 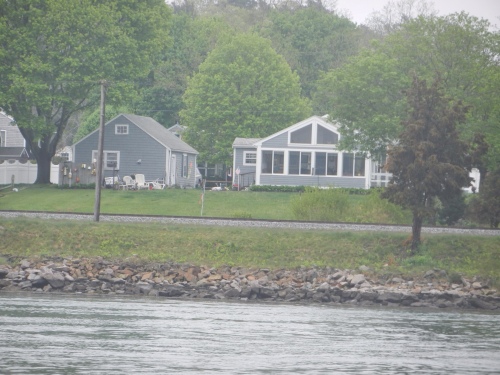 At the end of the canal was the Maritime Academy. Their practice ship was named The Kennedy. 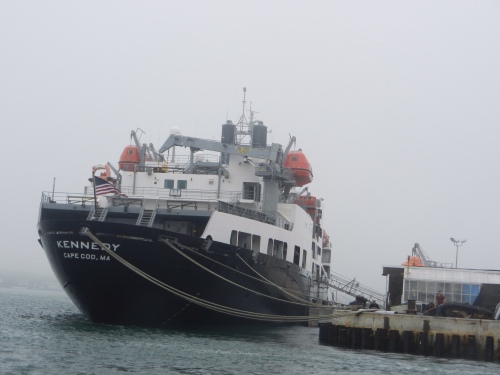 At noon the girls began their watch. We took four hour watches. It would take 48 hours to reach our destination. 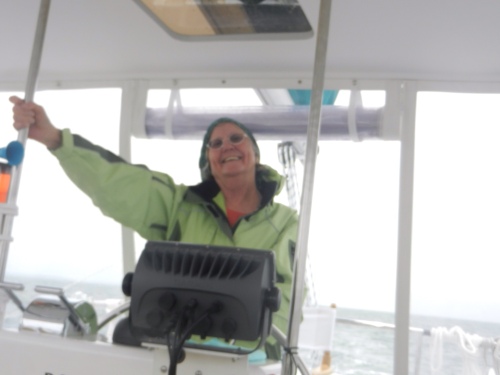 For lunch we had lobster bisque and steak sandwiches. YUM!

Our clothes wear still drying out aft last night's soaking in the rain. 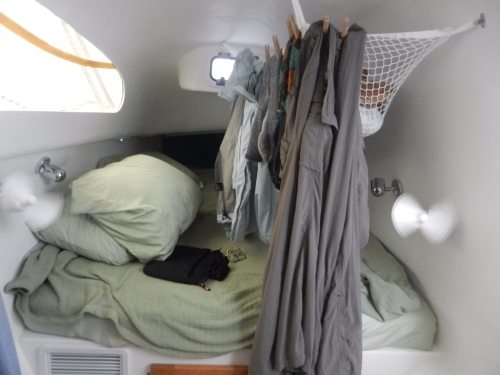 At 2 p.m. the sun came out. We were crossing Buzzard's Bay headed to Long Island Sound. While the girls were at the helm Capt. Ralph figured all the waypoints for the passage and entered them into the Garmin. The winds were out of the SE at 20 mph. We were heading straight into the wind headed for Long Island Sound. It was very choppy. We were rocking and rolling.

Stephen put on his life vest, attached to the jack line and went out to tighten the dinghy spring lines. We were still rocking and rolling.

The guys were on watch from 4 – 8 p.m. They refueled the tanks after their watch.

Dinner was leftovers from the night before at Bobby Byrne's. YUM!

Sunset was at 7:30 p.m. We had a good time howling together.

We were off Rhode Island Sound when the girls took the watch over again from 8 – midnight. There was a lot of traffic and they had to keep a careful eye out. There were shipping lanes, a ferry and a lot of fishermen off in the distance all evening long. The ferry went from Block Island to Judith Point, a very busy area.

There was one moment of excitement when one of the fishing boats came right at us very fast. We woke up Capt Ralph and he was quick to shine the spotlight on the boat causing them to change course none too soon.

The guys took over the watch from midnight to 5 a.m. They stayed on an extras hour to get us through “the race”, an area of big swells and chop that occurs just as one enters Long Island Sound.

The swells were so big in Long Island Sound it's hard to imagine what it must have been like in the Arlantic.

It was slow going against the wind and we only made 1 to 2 knots.

For breakfast, we all had scrambled eggs and English muffins.

There was a leak coming from beneath the binnacle and the cockpit had quite a bit of water in it. Also Ralph and Arlene's bed became wet on one side. By 8:30 a.m. we were approaching Connecticut.

Ralph deviated from the original course hoping to find smoother water. It was still very choppy. Being in the bow of the boat where the potty is located was quite challenging. Franci started calling it the bronco potty as she occasionally found herself airborne. Yeehaw…ride 'em cowgirl!

We had hamburgers for dinner. It had been a long time since our scrambled eggs for breakfast and the burgers were very welcomed by all.

After dinner while the girls were napping, the guys put up the sails for the first time. Woo Hoo! We were finally sailing.

The girls got to sail on their watch from 8 – midnight. It was a peaceful evening. The girls saw three barges but they were in the shipping lanes and posed no threat. It was freezing cold that night and we wore every layer we had,

At midnight. boys came back on watch. They took down the sails and motored into New York. We had changed plans because it was obvious we were not going to make it to Cape May on that passage. At 3 a.m. we motored down the East River. There was no one on it but us. What a sight! New York was lit up!

By dawn we were tied up at Liberty Landing where we would get to spend the next 48 hours.

If you are following this blog and get email notice of each new post remember to click on Dolce Vitaville at the top or put the link in you browser. Other wise you may only get the text and not the pictures

Leave a Reply to Judy and Marty Cancel reply