We left Morehead City at 6 a.m. Stephen was excited about trying to catch a fish. He went online and got the appropriate fishing license and had fun putting together this new gear.

We spent the day traveling south in the ICW right along the coastline. On the mainland side of the ICW were lots of private homes, some of them quite large and with very nice private docks. On the barrier islands side were hotels and condominiums. Many of these homes were vacation homes. It makes one wonder what their real homes look like. 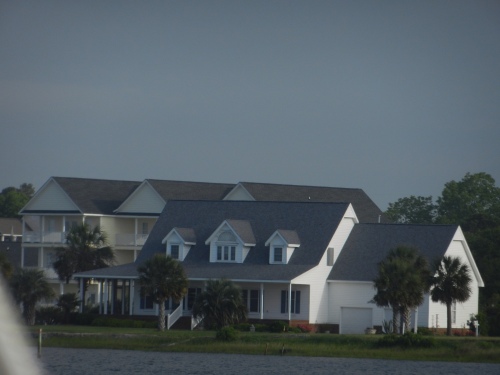 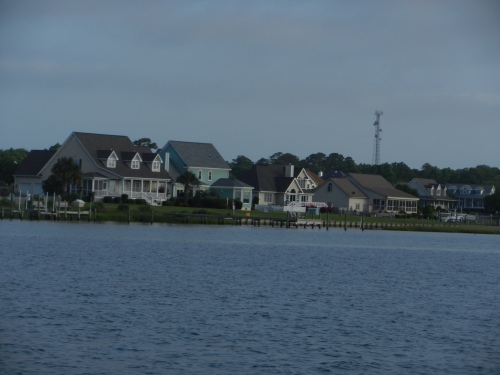 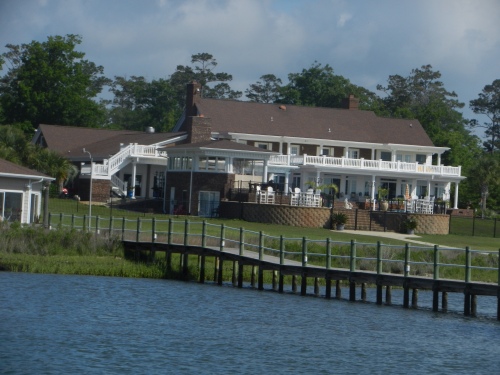 We started to call it the Parade of Homes.

These little islands were created when they dredged the channel.

Stephen and Ralph roll up the eisenglass to let the breeze flow through.

Ralph made his final fix to the steering linkage. He replaced the hose clamp with a stainless steel one. 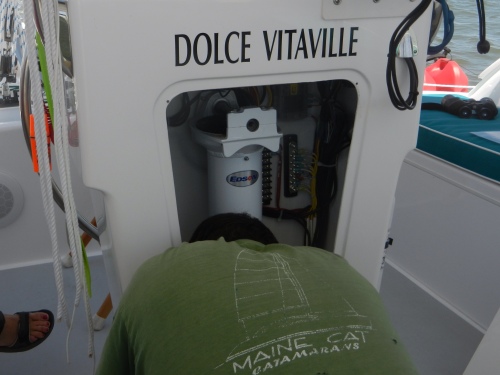 About mid morning we had a hearty breakfast with cream of wheat, fruit and toast. 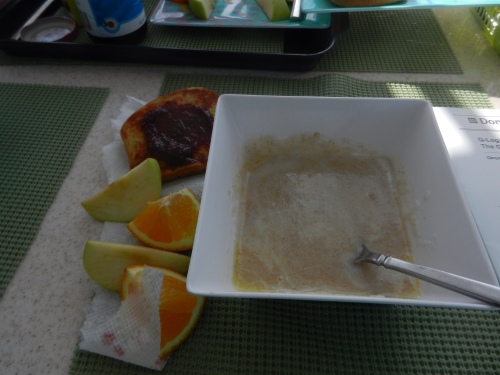 We saw lots of osprey nests in the channel markers.

We saw a deserted boat.

The parade of homes continued throughout the day. 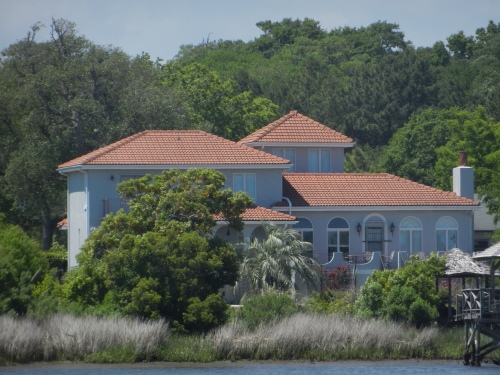 Some homes had beautiful trees. 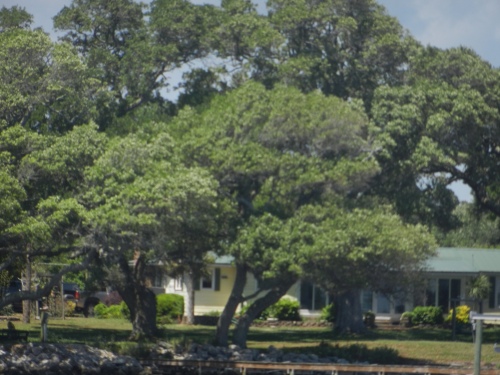 The fishing went on throughout the day.

We waited on several bridges that day. At 11a.m. we waited for the Onslow Bridge, a swing bridge. There were a number of folks fishing there. We were not far past Camp Lejeune, note the military guys. 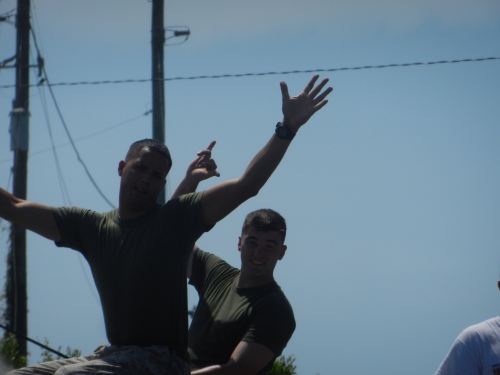 We passed under the Goose Bay Bridge.

We picked up the pace with our engines hoping to make the 2 p.m. opening of the Surf City Bridge, another swing bridge.

The last bridge was the Wrightsville Beach Bridge. It was a basculle bridge and we had to wait 45 minutes for it to open. After that we pulled into our anchor spot there at Wrightville Beach. 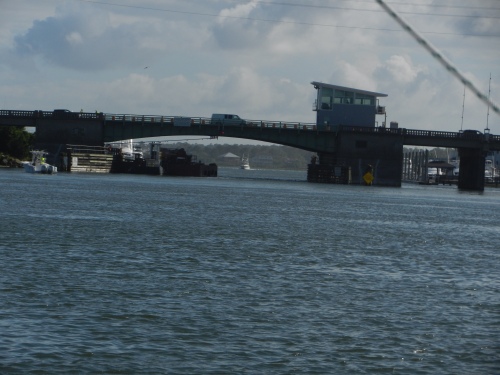 We saw lots of power boats, many of them yachts. Not so many sailboats. 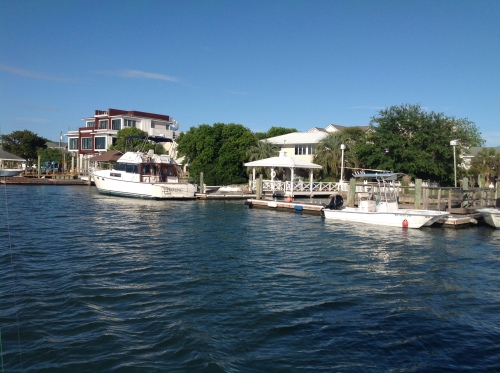 This was the opposite of our deserted anchorage near Belhaven. There were lots of other boats anchored there and we were surrounded by hotels, condominiums and beach houses. 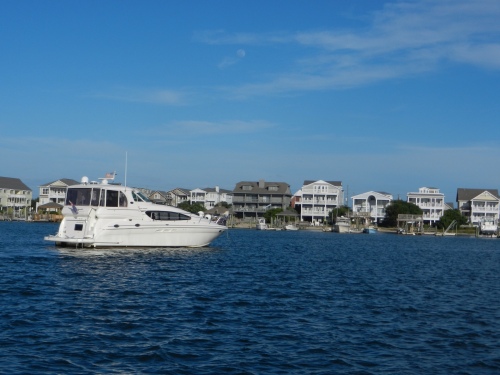 Stephen got Into the water to see if his fishing line had wrapped around the prop. All was okay. 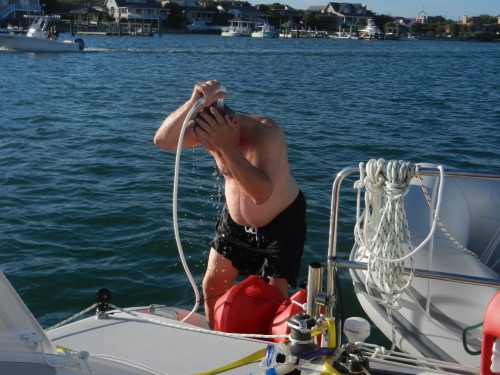 We had a delicious feast of leftovers…..ginger beef, fish, rice, avocados, tomatoes and whatever else was left from previous great meals. 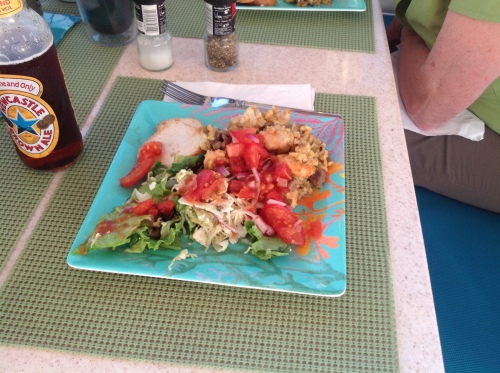 We had one small incident when the tide changed and the neighboring boat came awfully close to ours. He had entirely too much anchor rode out for a small crowded anchorage such as it was. We kept an eye out for awhile. Eventually, we retired relaxed and satisfied with another successful day.