Continuing where we left off on Saturday evening, things were very calm…Ralph on watch…. 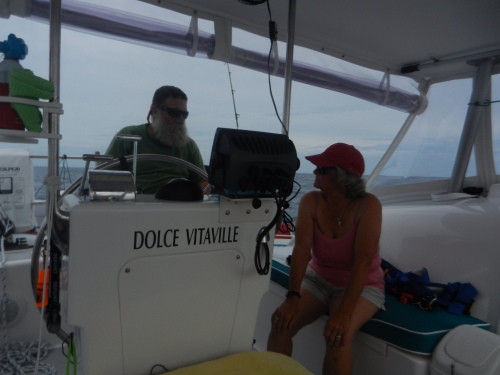 We were still underway but winds had subsided and we were only sailing 4 knots. We were able to put out the grill to cook. 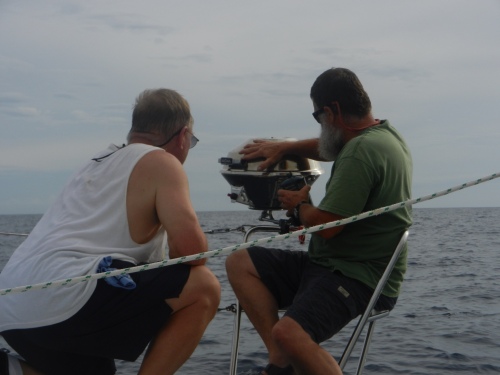 The fresh fish, veggies and rice were delicious.

There was little to no sunset that evening. The rain began to move in. A highlight of the evening, however, was a pod of dolphins that danced around our boat for about ten minutes. 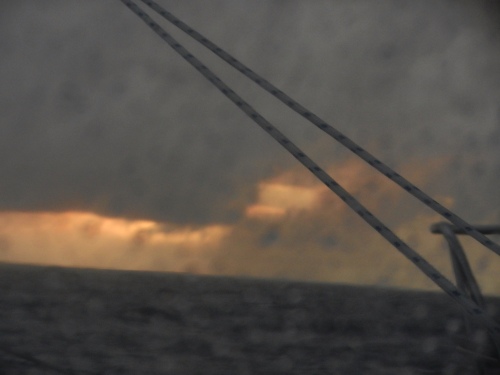 Later that evening we took down the main sail and motored on one engine, conserving fuel since we had chosen to extend our destination. It continued to rain throughout the night. Eventually the seas became very rough.

Come Sunday morning the weather looked bad. We changed course again, this time headed northwest to Mobile, Alabama, just in case the weather got even worse. Arrival time in Mobile that evening was expected to be around 7:30 p .m.

At 10 a.m. that morning we put up the main sail with two reefs so as to head to port as fast as we could make it. By 11 a.m. we finally heard small craft warnings on the radio. The swells were growing. We were rocking and rolling. We attempted to catch the size of the swells with our cameras but none of our photos did it justice. With the sail up the new arrival time was 6:30 or so.

When we found ourselves sailing 13.8 knots we knew we needed to take down some sail. At noon we took down the main sail. It was way too exciting at that point, especially having the captain outside on the cabin top stuffing the remainder of the sail that did not fall into the sail pack and securing the halyard. He mentioned that many of the screws holding the sail to the little cars that attach the it to the mast were loose and needed to be tightened.

At 2:45 Capt. Ralph refueled one more time. We put in the last of our gas from the jerry cans. This had been our longest run so far. We still had 30+ miles to go to reach Mobile. The waves had subsided a bit by then but the rain continued to come and go. Soon Ralph and Stephen went topside to tighten the screws on the main sail. It was still raining but they wanted to be able to put the sail back up to help us get there faster. It took an hour but they had fun doing it. Boys will be boys. They were, of course, soaking wet but they were totally successful in their mission. By 4 p.m. the mainsail was back up and sure enough we were able to go faster. We were still hoping to get into Mobile and situated before dark. 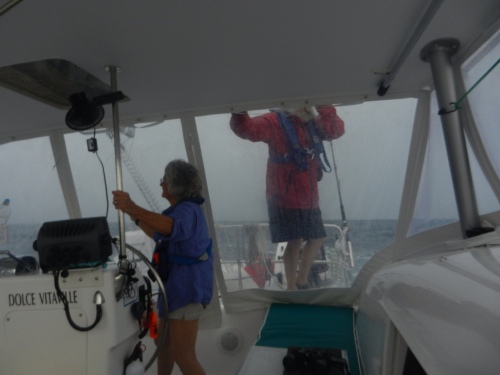 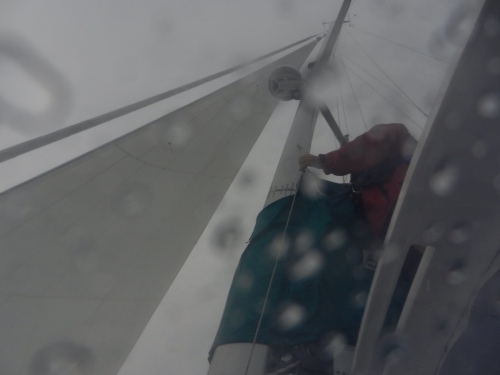 We changed time zones giving us an extra hour. That was a positive, however, the sun remained the same. Soon we could see ships in the channels outside the Mobile Bay area as well as random oil platforms. It reminded us of home. Not too long after we reached the first entrance buoy and began the long entrance into Mobile Bay. It was incredibly choppy as we and others came into the area.

For dinner Arlene cooked us chicken fajitas and corn on the cob. We had to wait until the chop subsided to eat but they were delicious when we finally got to eat.

Unfortunately, despite all efforts, the sun went down before reaching our final destination at Daulphin Island Marina. Arlene was out front with a good spotlight finding the necessary buoys to guide us in. Since we were unsure of the services at the marina and it was 9:30 pm we decided to anchor outside the channel in 7 feet of water.

All in all it was an incredibly tense day. We all sat down for a couple of adult beverages before retiring. The weather forecasts don't look good for the days ahead and we see our dream of sailing into Texas fading away.