Last night we had found an anchor spot close to Daulphin Island following our long, stormy trek in from off shore where we got caught in yet another tropical depression. Before retiring we closed up all the hatches and eisenglass in anticipation of more rain to come. Around 3 a.m. Franci awoke realizing that she and everything around her was wet. The hatch above the bed had not been closed and it had rained heavily. Stephen and Franci arose and took all the wet bedding off the wet bed. Franci put on dry clothes. We were able to put a towel over the wettest spot and with a dry blanket got a few more hours of sleep.

Around 7 a.m. we pulled up the anchor and went in search of the Daulphin Island Marina where we had anticipated getting fuel, water, and ice. We discovered that they were on the other side of a bridge we were too tall to go under. We searched our sources and found that the closest convenient marina with services was in Biloxi, Mississippi. We determined that we still had enough fuel to go the 40 miles to Biloxi so off we went to our new destination.

It was still raining off and on that morning, sometimes very heavy. We were rocking and rolling even in the ICW. We were all happy not to be off shore anymore. We ate a good breakfast with oatmeal, fruit and English muffins. 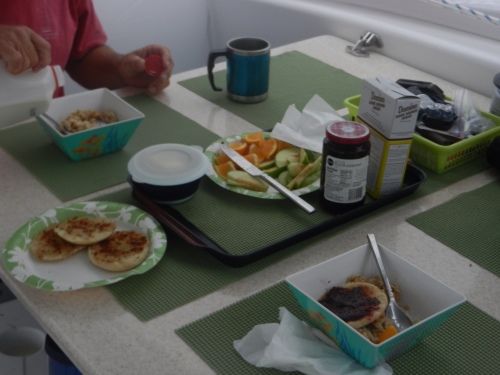 Late morning the rain subsided and we could see blue skies ahead. Arlene began puttering and cleaning up the boat. This led to a decision to empty water out of the main sail cover which led to tightening the rest of the loose screws. it soon became an all hand's on deck activity and everyone had a part in the action. After all was done, Stephen zipped up the sail cover so if it rains again, water will not get in

We put in a call to our buddy boat friend, David, that we had met at Indian Town Marina in northeast Florida. We had had dinner together one night at the Franklin Lock Campgrounds where we stayed following a day of going through locks and bridges together. David is from Biloxi and we figured he could recommend the best marina for us to go to. He suggested Pt. Cadet Marina and, as coincidence would have it, he expected to arrive there himself that evening. He was just then arriving in Biloxi with the Seal Boat, the boat he was hired to deliver when we met him.

We had tuna sandwiches for lunch and listened to the afternoon weather report. We noted that we no longer saw blue skies ahead. The marine weather station spoke of more thunderstorms to come and put out warnings about a water spout that had been spotted. The storm was not over yet. Down came the eisenglass again.

Eventually we found ourselves arriving in Biloxi. 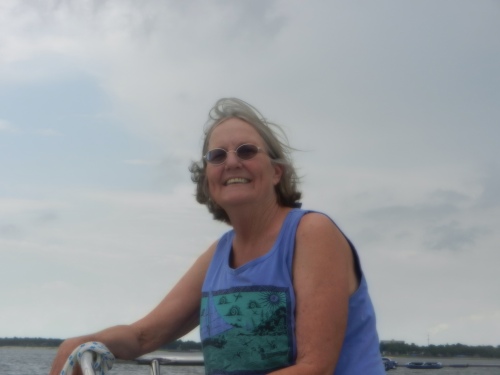 We arrived at our marina around 4 o'clock. We filled both tanks and every jerry can with fuel and bought 100 lbs. of ice, all that the coolers would hold.

The harbor master, Richard, showed us to our slip. It was very narrow and took a long time to move into. We began by backing in but after discovering that the electrical cord would not extend that far ended up turning the boat around forward. Finally the boat was situated and all the electricity and water connected. 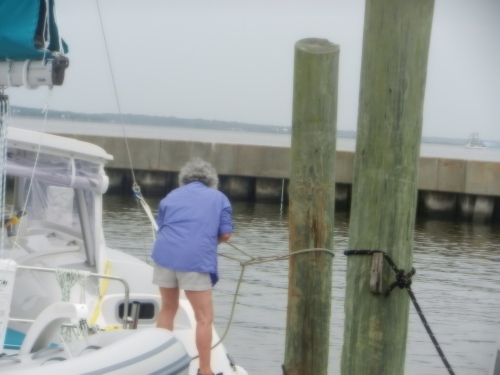 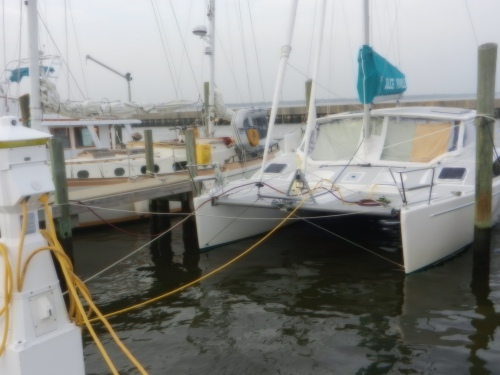 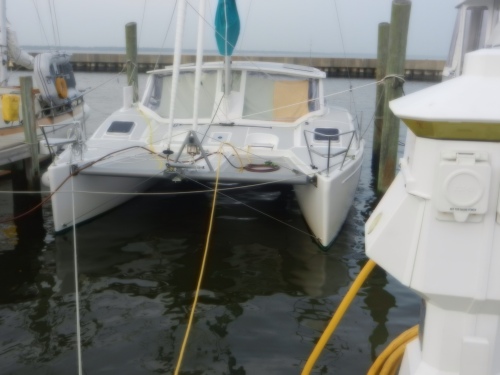 There was still a bit of fumbling yet to do with the AC. It for some reason had to be primed again. When it was finally going, folks put up a blanket blocking the sun coming through the windows and things began to chill down. Happy hour officially began.

Franci took wet sheets and a blanket to the laundry. She also did a couple of loads of wash for she and Stephen. We all got showers and enjoyed the cool of the evening.

We walked to the nearby casino for dinner. The suggested buffet was just too bright for us and, besides, they did not serve adult beverages. We were days behind on our partying at this point. We went to the steakhouse instead. We enjoyed sitting at the bar and exchanging jokes with Amanda, Chris and a friend whoi came into the bar as well. It turned out the bar served sandwiches as well so that became the perfect fare for dinner.

Biloxi, it turns out, is a big gambling town, They used to have casinos on barges but several years ago they were wiped out by the hurricane. They are currently rebuilding the casinos on the water's edge on concrete pilings.. The casinos themselves are immense concrete structures with attached parking garages and hotels. 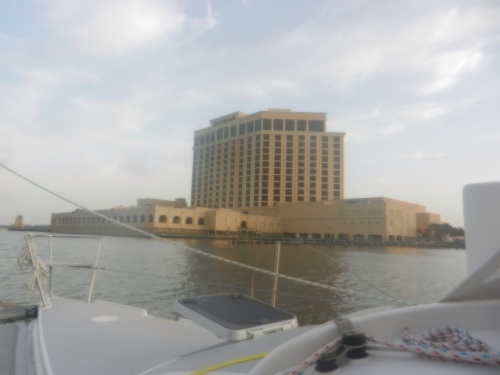