Yesterday afternoon was an event which did not make the blog because we needed to get on with our evening fun. However, at some point close to our destination, Manny,who had been following us with a barge for many hours, radioed and asked to pass us. We were happy to oblige. He said there was traffic ahead and he wanted to get ahead of it.

Boy, he wasn't kidding. We saw a couple of barges that were more like trains. They each had a tug at the front and one in the back. They were longer than football fields. There was a lead tug called the George W that sort of ran interference for them. Manny radioed them and said he was coming around. We kept up with Manny and passed them, too. It was exciting. I wish I had taken a photo of Ralph's face as we went around. I suspect he was smiling really big! It was a big thrill. And not scary like the thrill we had in the lock. Fun! 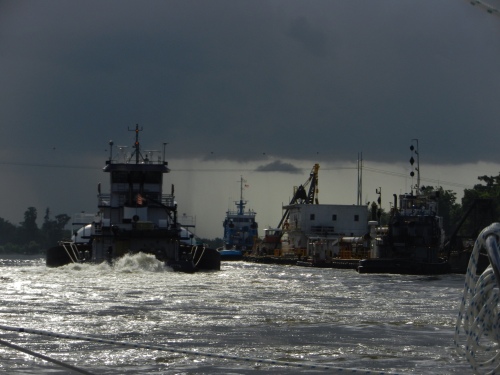 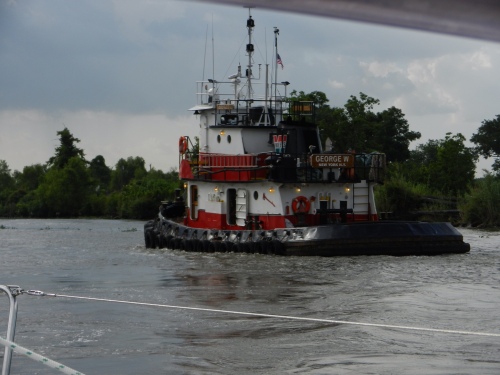 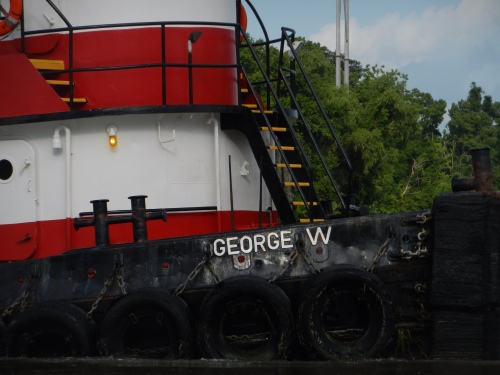 We pulled into Houma last night around 6:30 p.m. We docked at a lovely little dock site by a new park area they have built under the new highway overpasses. Very charming and only $25. They had electricity (for our AC) and water. That was everything we needed.

For dinner we walked a few blocks int the downtown area. The harbor master had indicated we could find a good restaurant there but we failed with that. But we recognized beer signs and headed to a local bar. We had drinks with the locals and they suggested a place called Al's. The bartender called us a cab. Arlene and Franci were thrilled to be able to take their cocktails with them. Louisiana is after all a place of its own. However Al's was closed when we arrived at 9:30 p.m. Our cab driver, Belinda, said she knew a good place and that she did. We had a seafood feast at the 1921 Seafood and Oyster Bar. We even got to visit with the owner who was proud to show us the award his restaurant recently won. If ever you are in Houma, it's the place to go. 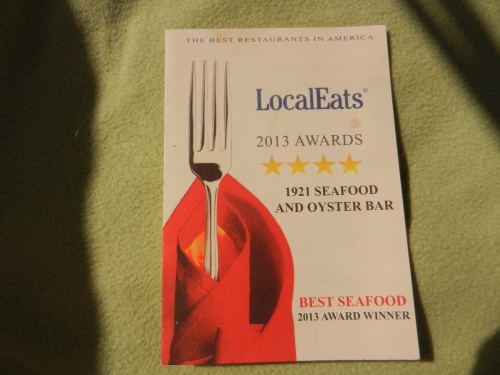 Upon leaving this morning our first mission was to go through a basculle bridge. The bridge has what they refer to as a “curfew” which is to say that it does not open between the hours of 6:30 a.m. and 8:30 a.m. giving morning car traffic the right of way. We had no problem getting there before 6:30 a.m. We left at five o'clock in the morning.

It was a peaceful morning ride though a gorgeous cypress marsh. For miles and miles both sides of the canal were lined with cypress trees. The debris cleared up and it was lovely. We saw no barge or tugboat traffic early on. We did see quite a few small motor boats. Was it the weekend already? 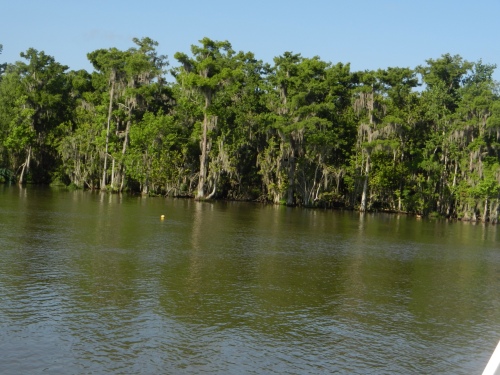 About 10:30 a.m. we arrived at the Bayou Bouef Lock. We lost no time there. We got to go in immediately. We were in there with a barge again but this time he was the one in the back. All went very smoothly. 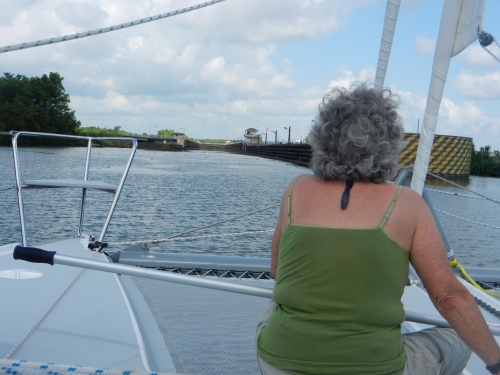 Soon after the lock we arrived in Morgan City. The right side of the canal had turned industrial many miles before we reached Morgan City. Lots of industry, ship building, tugs and barges. The debris in the water returned. This would continue into and past Morgan City. 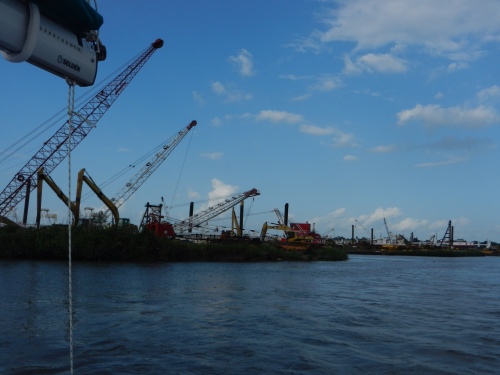 After that the canal became deserted again with forest on either side. This time it did not appear to be cypress tress but it was lovely just the same. We continued to see barges and tugboats. 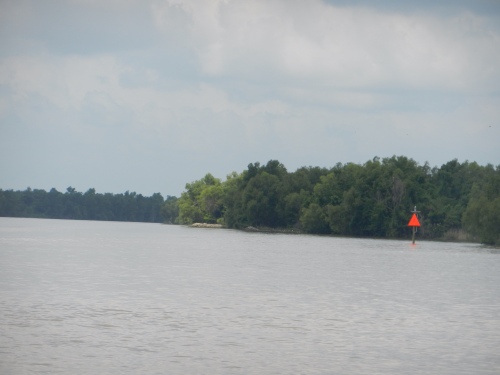 At some point we saw this brown yuk in the water. We don't know what it was but it looked yucky.

At some point Ralph put in more fuel.

Stephen enjoyed a turn at the helm in the afternoon.

Our destination was a small community called Delcambre, pronounced “del come”, a place we learned about from Roger and Laurie, the folks we had dinner with at the Seabrook Marina the other night. They reported to have really enjoyed their stay there. It sounds authentically Cajun. It's a few miles off the ICW but sounds like it may be worth checking out. We arrived by early evening after having traveled 90 miles that day. We all took showers before our arrival so as to ready for a night of partying. We heard that they sometimes party pretty hearty there.

We hoped to get an opportunity to bring out the musical instruments. It would be fun to meet some authentic Cajun musicians and jam. More on all that later.

6 thoughts on “from Houma heading west down the ICW #56”

Leave a Reply to Franci and Stephen Cancel reply