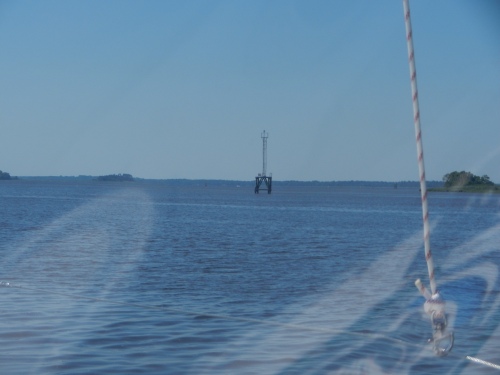 There was much excitement in the air that morning. The winds were coming from the north and we were heading out into the Atlantic to do some sailing.

We reached the ocean about noon and by 12:50 we had the sails up and the engines shut down. We were going about 5 knots. Capt. Ralph put garbage bags over the engines to protect them from the splashing water.

We decided to put up the screecher (the big light air genoa like headsail) to see if we could go even faster. We steered a heading towards Charleston, NC and were making 8 knots. 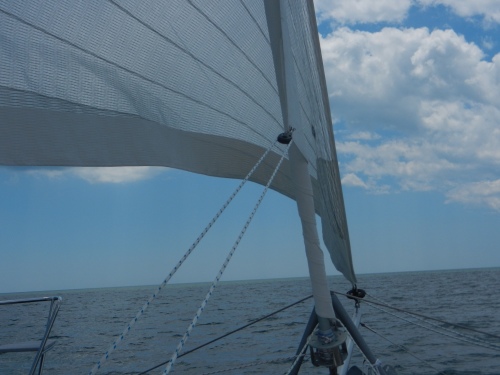 Arlene made tuna sandwiches for us.

At 1:25 we were in a close reach and we adjusted the screecher. We were right on course going 6 knots.

Stephen put out his trolling line in anticipation of catching the big one. We started going 8 knots.

At 1:40 the winds picked up and we took the. screecher down. We learned that the trick to taking down the screecher is to go until a broad reach, After its down we went back to our course, a close haul at this point.

After a wonderful tuna fish sandwich lunch Franci and Arlene went down for naps so as to be rested when it came time for their watch. The naps were interrupted by lots of commotion when Stephen caught a fish. It turned out to be a black skipjack, not so good for eating but okay for baitfish. Stephen cut a few pieces off hoping to use it to lure the Mahi Mahi or tuna.

Arlene came on watch around 3 o'clock. Ralph went down for a nap. About 5:30 there was action on Stephen's line. Sure enough, it was the big one. He gave it a real good fight but, alas, the fish got away.

At 6 o'clock Franci took the helm. We were still making 7 knots and we were beginning to see the traffic going in and out of the busy Charleston harbor. We were glad to be on the other side before sunset. Stephen took the helm at 7:30 a.m. 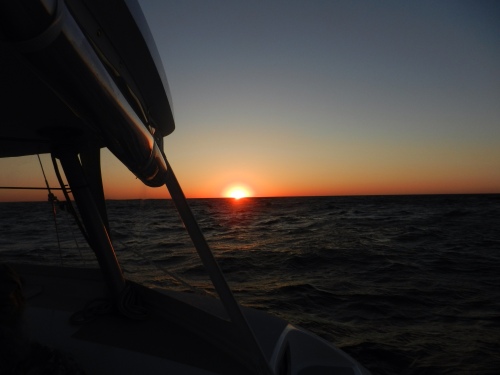 It was shortly after this that things began to go wrong, Close to sunset Franci decided to take a photo of the sun going down across the ocean. She forgot the first rule of sailing on the ocean, “one hand for the boat and one hand for yourself”. The moment she put both hands on the camera, she went airborne. She was thrown from one side of the cockpit to other in mere moments and landed very hard against the garbage can which Ralph had installed on the left side of the companionway opening. Fortunately it stopped her from catapulting through the companionway opening into the galley below. That could have been really bad. As it was she was bruised and hurting. Shortly thereafter she had to excuse herself and go below for some rest,

Soon after that we had trouble with the auto pilot and went back on manual steering again. Nonetheless the sailing went on through the night. We were able to get the auto going again the following day. The moon was huge and it was a beautiful night to be sailing.

Unfortunately, Franci was not getting any rest down below because the pain from her tumble would not stop. At 4 a.m, she announced that she wanted to go to the emergency room to confirm that she was only bruised and that nothing was broken, Ralph and Stephen turned the boat to the right and took off for Georgia. Six and a half hours later we arrived in Thunderbolt, Georgia.

Stephen and Franci went to Memorial Hospital in the Savannah area. We report the nicest emergency care we've ever experienced, The staff was friendly, sympathetic and helpful. X-rays were taken and we were relieved to know that it was indeed only bruises, Pain medication was administered and prescribed and the day got better immediately,

Ralph and Alene, after a well deserved nap, started work on repairing the auto pilot. All of us were able to take showers and do laundry as well as pick up a few items at the store. We had a fun dinner at a local restaurant named Tubby's, one if our favorite activities, and enjoyed a restful night's sleep. Imagine our surprise when the folks at Tubby's poured Ralph and Stephen's wine in “to go” cups after the cab showed up sooner than expected. Stephen even found a great seafood restaurant and bought us boiled shrimp we would eat the next day on our journey across Georgia.

It was decided to go back into the canal again for a day or two giving Franci a little time to recover. Hopefully, we'll be back in the ocean sailing again in a few days. Our next big destination is Fort Pierce, FL where we will meet up with the parts to fix the leaky potty.