We left Delcambre at 5 a.m. This day was destined to be a long day of travel. 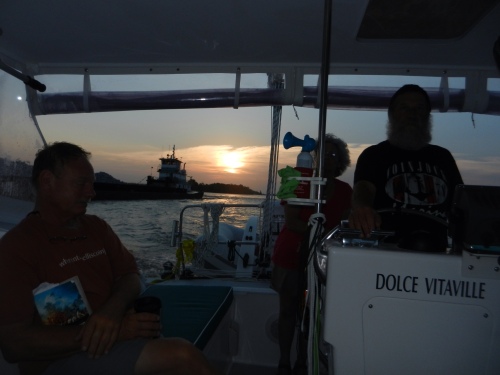 We stopped at Shell Morgan for our last fuel stop of the journey. We restocked with plenty of ice in both coolers.

We passed through the Leland Bowman Lock. The gates were open on both sides. No waiting there.

Later in the day we would pass under a lift bridge with only 50 foot clearance. Our mast is 49'. We proceeded very slowly. There was a four hour wait if you had to ask them to open it.

Here's Stephen making a video of the event.

We passed farmland with rice fields. We saw a few homes along the ICW. We saw lots of wildlife…..alligators, snakes and birds mostly.

We had a wonderful breakfast with scrambled eggs and the homemade sausage we received in our gift basket in Delcambre. Yum. The sausage was very good and very different…..sorta sweet but with a bit of a bite. Great breakfast.

All afternoon we just drove on through the marshes of Louisiana. We planed to travel over 130 miles on Friday. Our destination was close to the Sabine River near Orange, just across the border into Texas. It's the first marina we saw with electricity and water. We planned to arrive about 11 p.m. and take off again around 4 a.m. We were on the final push.

Everyone took a turn at the helm that day.

Ralph catches up on paper work.

For dinner we had fried catfish sandwiches and French fries. We had bought an extra dinner the night before iin Delcambre just for that specific purpose. It was delicious. We were so hungry we forgot to take photos.

Just before sunset we went through a pontoon bridge and a lock. No waiting for either.

Around sunset we saw the most traffic we saw all day. We crossed the Calcasieu intersection of the ICW coming from Calcasieu Lake into the Calcasieu River headed north to Lake Charles.. We were glad to be there before dark. There were lots of barges and tug boats, many moving and even more parked. We saw another sailboat that had been anchored for four hours waiting for the 50 ft. bridge to open. We were happy to have made it under ourselves with inches to spare. Ralph helped the sailboat communicate with the bridge operators. They were anchored in a bad spot in a busy intersection. All were glad to see them get through the bridge. 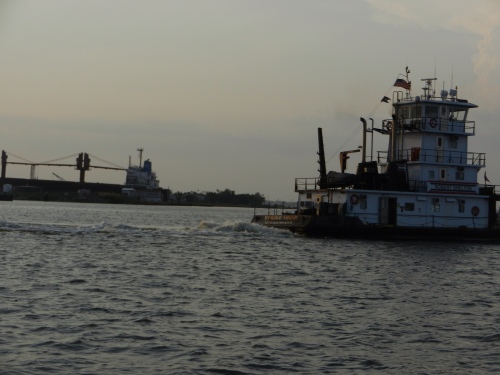 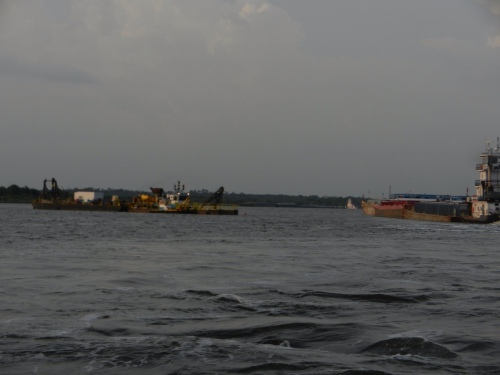 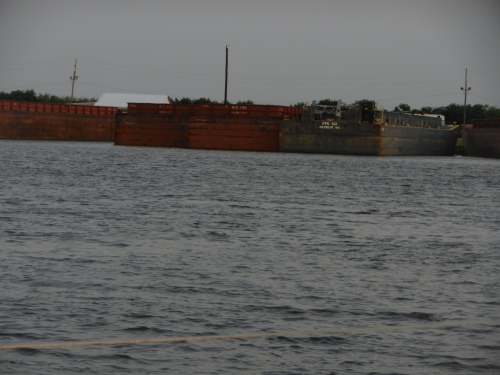 Eight o'clock sunset and 20 miles to go to the Texas border. Yeee Haw!

Then the adventure began. First a storm hit with lots of lightning and winds up to 40 or 50 mph. Soon after that the decision was made to continue on through the night. We had only planned to stop for a few hours anyway and somehow the thought of messing with docking and lines in the rain was not appealing. We also had made friends with a tug, Miss Kelly, and had arranged to follow him through the night.

All went well until the mosquito invasion began. Hard to believe but we couldn't find any deet when we needed it. None of the herbal products we had were any help with aggressive Texas Mosquitos. We dug out the mosquito netting and crawled under. We looked like Casper and his sweetie. That seemed to work. Captain Ralph and Arlene just roughed it out.

There are no photos of any of this fun because it was night time. 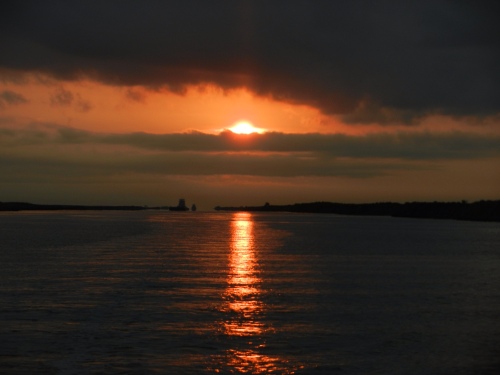 For breakfast we had shrimp wrapped in bacon plus peas and rice with shrimp. The shrimp were all part of the gift basket we were given in Delcambre.

The last few hours we have been going down Bolivar Peninsula. We just passed Galveaton Island and turned right into the ship channel headed to Kemah (Clear Lake) where Seabrook Marina is located. We will be there in a mere couple of hours. This is the final stop for this leg of the journey. We will have traveled a total of 37 days since leaving Maine and covered over 2500 miles. Thank you Ralph and Arlene. We could not have done it withou you.

Icons of Texas…….pelicans and refineries. 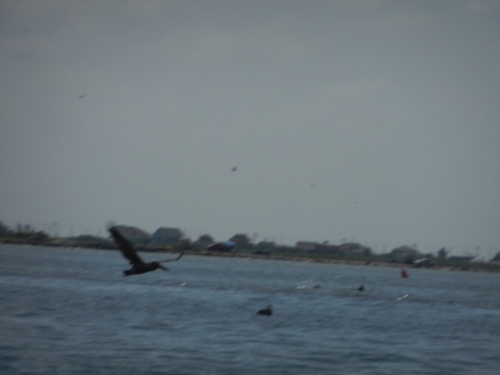 The bank building in Galveston which is a landmark for us because the Old Quarter is located right across the street. The Hemmeridge Mountain Boys are having a reunion there this very evening. Wish we could be there……almost!